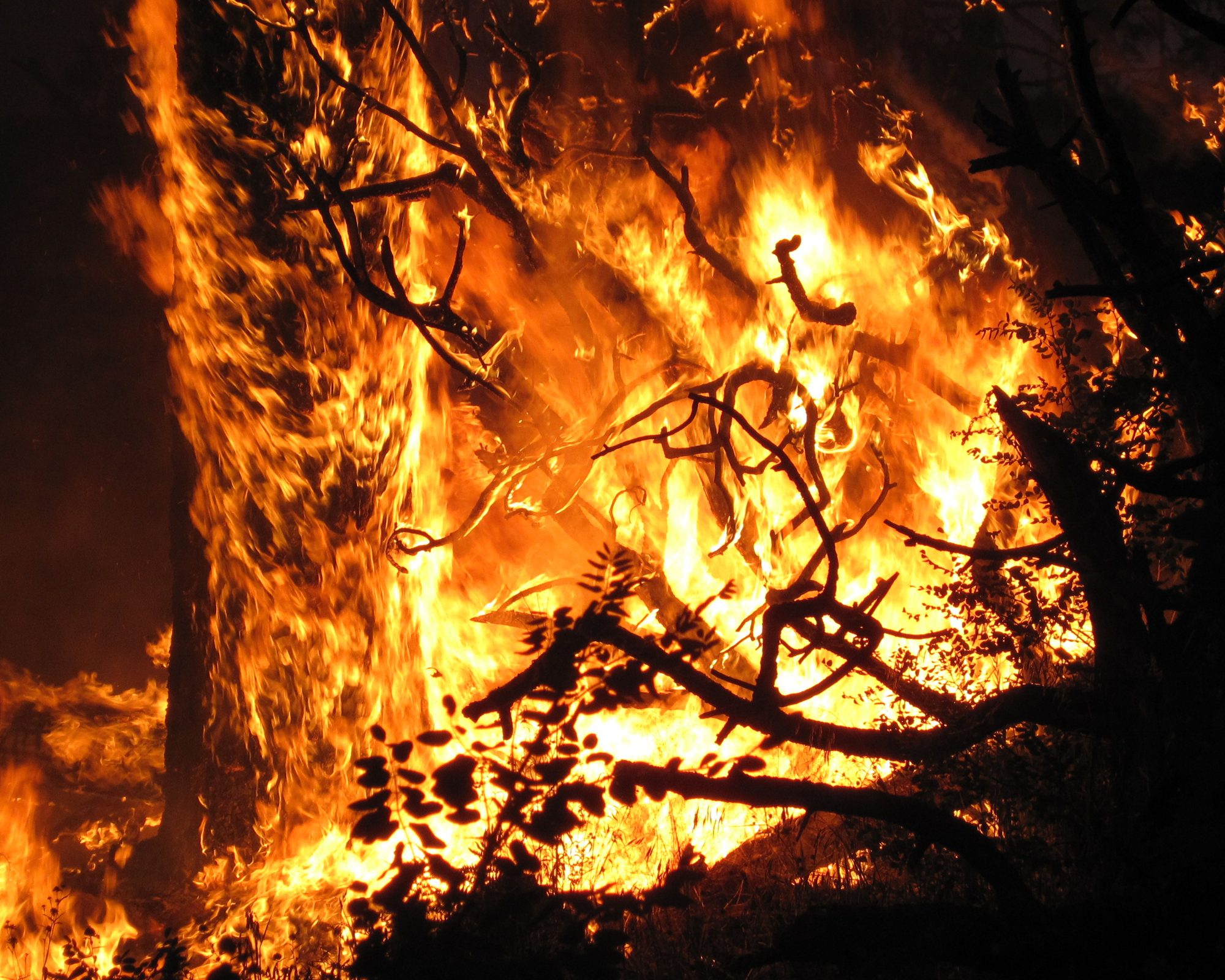 Getting Our Heads Around the New Fire Environment

These days, there is hardly a wildland firefighter that hasn’t said or heard “I’ve never seen anything like that before.”  We know that wildfires and the fire environment are more extreme each year. Thinking about a shift from a fire season to a fire year is yesterday’s news.  Retired Cal Fire Chief Ken Pimlott put it very well:

Folks can say what they want to say, but firefighters are living climate change. It’s staring them in the face every day.

Knowing it is one thing. How do we use that to improve our day-to-day, real-time risk assessments and choices on the ground?

Last summer I was out as a Fire Behavior Analyst (FBAN) with a Type 1 Incident Management Team on the Dolan Fire in California.  Dolan was immediately south of the 2016 Soberanes fire scar on the Monterrey District of the Los Padres National Forest.

While our team was there, the fire grew more in one 24 hour period than any fire had on that district to date, beginning in the afternoon on 9/7.  Growth continued through the evening culminating in a final push on the morning of 9/8.  This push led to a fire shelter deployment of 14 firefighters that morning, injuring three, one critically.

This happened when so many other fires experienced the labor day East Wind event.  Tragedy was rampant up and down the west coast.  “Unprecedented” didn’t seem to come close to describing what happened.  Prior to this, the most homes burned in a single fire in Oregon was 43 in 2015.  Nearly 10 times that number of homes were affected along the Oregon coast alone in 2020.   Entire towns were devastated.

Yet on Dolan, when the final push happened—when the deployment occurred—winds were light. Most of the firefighters who deployed were quartered at the Nascimento Guard Station.  Their experience told them that they did not need to evacuate the night before.  With no howling wind and never having seen growth like that in such a short period, I bet a lot of us would have thought the same thing.

So here we are—we know things are different.  If experience alone isn’t enough to assess risks, what do we anchor to?

In 2017, we had a winter with average to above-average snowpack across the Western US.  An uptick in activity in late June in places not typically active until later in the summer started raising eyebrows. Live fuels were behaving just as you’d expect after a good winter.  Fires would check themselves in drainages at night.  It was a different story in dead and downed fuels.  Where they could preheat live fuels, we saw continued fire growth.  By mid-July, heavies were tracking with 2015 levels.  2015 was year 6 of widespread drought.  Not what we expected.

In the Pacific Northwest, daytime temperatures have risen an average of 1.3 degrees Fahrenheit over the course of the 20th century.

Think about your slides for what nighttime humidity recovery means in terms of available fuels.  How off are they with this temperature change? A nighttime recovery of 74% today is not the same for fuels as when temps were lower.  Fuels are not getting the same relief that they once did.

There is another index, Vapor Pressure Deficit (VPD), which is similar to relative humidity but instead of being relative, it’s an absolute.  It goes up as temperatures go up.  It translates to plant stress.  It’s not a number you can get readings of in the field to gauge your hourly conditions.  But it is more precise than drought levels, can be seen in Fire Family Plus, and can give better context to your fire environment.  We saw this on the Dolan fire where VPD hit new extremes while no other index tracked with record-setting growth.  FBANs and fire planners can use it to help paint a picture in terms of what kind of fire environment to expect on the line today or on your burn tomorrow.

When the Dolan fire grew last September, we had an absence of the marine layer for several days before things broke open. Marine layers come in along our west coast, usually at mid-elevations, and create a break in the fire environment above and below them.  Above a marine layer, things can be much drier and more active than you’d expect, even overnight.  The layer creates a cap where below it, fire will smolder.  You can have holdovers that pop up weeks or even a month later when the marine layer finally recedes.

This breaks up the continuity of fuels across a landscape.  Even if the fire is raging above this layer, fire will not rush through it.  You can only get so much momentum when your fuels are fragmented this way.

When the marine layer breaks you now have one continuous fuelscape.  Everything has become available.

Fuelscape continuity on a larger scale

Scientists have been putting together how increasing temperatures translate into the what we see on the ground.  This graphic shows how these temperature changes have increased available fuels and how that plays into increased fire footprints: 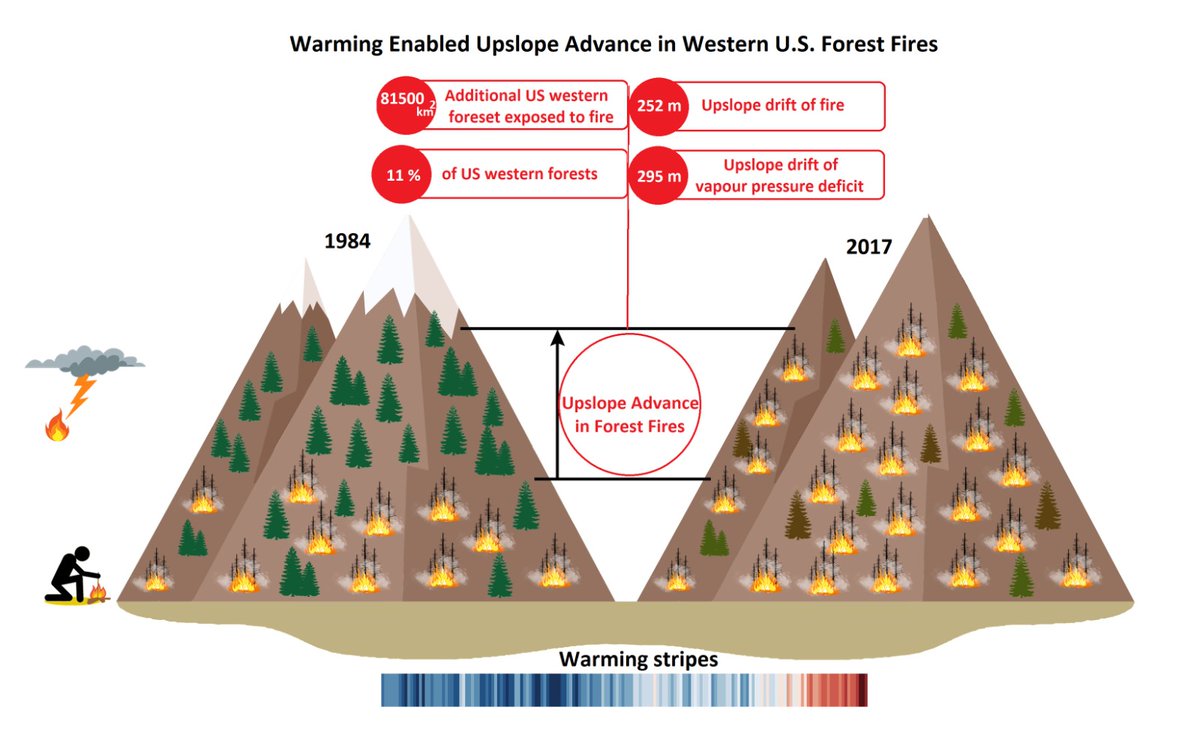 Based on this research, increased temperatures from 1984-2017 have resulted in 20 million acres added to our fuelscape.  Historically, elevation and aspect disrupted the continuity of available fuels. They created natural, temporary fuel breaks.  These natural breaks are much less reliable every year.  In other words, we not only have more fuel available, but we also have a more continuous fuelscape.  Any given start now has an opportunity to build more momentum than we have seen before. There is less to slow or stop it.  That translates into what we see increasing each year: rapid, intense, and explosive fire growth.

The most important thing to know on the ground today? Recognize that what you are calibrated to equate in your mind in terms of RH/fuels/fire behavior is not current.  It will lead you to underestimate risk.

When I brief crews on an incident, I know they will see things that no one has seen before. We are routinely asked to make tough decisions in a dynamic setting with little information or time. The fire environment has been changing exponentially in recent years, but our strategies and tactics have been slow to catch up.   Getting everyone to the same baseline is the key to support the critical thinking we need.

Thom Porter, the current chief at Cal Fire, has a great way of framing what we see today.

“They talk about career fires. And a career fire was sometimes on the order of 10,000 to 50,000 acres. 50,000, that was crazy….Once in a career. It dawned on me at one point that career fires are happening every single year, right now.”

A friend reminded me of an old saying that still applies, “Fire provides the test before the lesson.” For any of us out there, all of this comes down to a fundamental question: how do I fight fire aggressively while providing for safety first today?  So that we all come home.

Head on a swivel is good. Getting your head around how the gameboard has changed and will continue to change—even better.

10 thoughts on “Getting Our Heads Around the New Fire Environment”